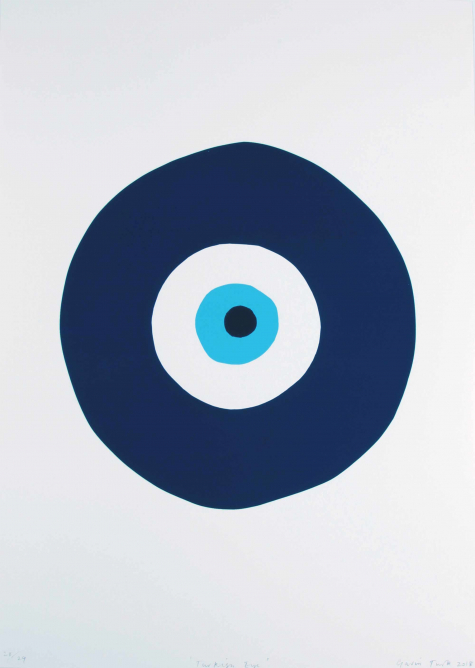 Turkish Eye (blue and turquoise) signed limited edition silkscreen print by Gavin Turk. Produced as part of the live printmaking demonstration at the London Original Print Fair 2018 and as such each edition will slightly vary.

A play on his own name, the print features the Nazar Boncuğu or 'turkish eye', widely displayed in homes, shops and businesses across Turkey to ward off evil and provide protection to the wearer in all aspects of their life. A prevalent part of Turkish culture, the turkish eye is believed to possess magic powers to protect you or bring you good luck. Nazar are often given as gifts to friends who have just had a baby, or moved into a new house, though sometimes they are given to foreigners as protection during their stay in Turkey. The Nazar symbol can also be traced back to the Ancient Egyptians, where the Eye of Horus was a symbol of protection, royal power and good health. It is said that when an evil eye cracks, it has done its job of protecting you. Reflecting the magical powers of the turkish eye, this print is available in an edition size of 29 prints, a primary number and considered magic in many cultures.

CCA Galleries and Worton Hall Studios were delighted to be joined by Turk over the bank holiday weekend at the London Original Print Fair 2018, where he produced the edition in a stimulating live printmaking demonstration at the fair's own Printmaking Festival.