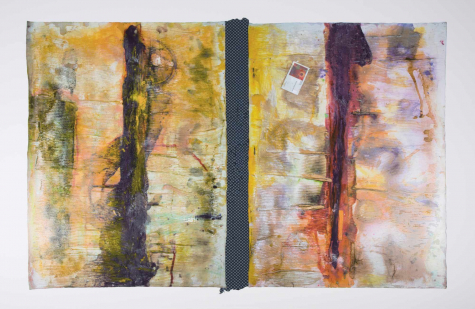 
Frank Bowling OBE RA (b. Guyana, 1934) moved to London in 1953, where his artistic career began shortly after his arrival at the Royal College of Art (1959-62). The artist has since established studios in both New York and London.

Bowling began his career as a figurative painter, and was involved in the British Pop Movement of the '50s and '60s. His  first solo exhibition, Image in Revolt, was hosted the year Bowling graduated at Grabowski Galleries in London. However, in 1966, Bowling decided to move to New York, aided by his first Guggenheim Fellowship awarded in 1967. Following this move to New York, Bowling’s painting began to turn to abstraction – the field in which his contributions were to be most significant. His pictures, which had always inclined towards a frontal geometric structure of space, became more geometrically complex, guided by principals of mathematics and symmetry. It is during this transitional period in the mid- to late-'60s that Bowling’s seminal body of work, the Map Paintings – a series of quasi-abstract colour fields overlaid with stencilled images of maps of Australia, South America and Africa – was produced.